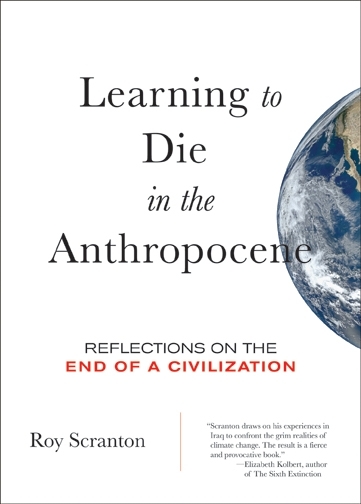 This is a reading material for my class PHIL 6740. I read the whole book and write the following as a response:

My culture does not teach me a terminative or apocalyptic thinking. What I learned is a nonlinear, sinusoidal and oscillatory thinking pattern with two, or three, or multiple but reducible elements interacting into an infinite evolving universe without an ending. Big Bang is another story because it is not told in a human time scale, but a cosmos time scale. I still remember the first moment that I was in a tremendous shock when the different thinking pattern informs me that there is an end anyway. The alarm is not from the description of the Revelation. It is from a Hollywood movie, The Road, which was released limitedly in 2009 in the United States. I do not remember in which year I watched the film. The film depicts how a father protects his son and brings him to see the ocean after a global cataclysm on the earth. The film was identified as a post-apocalyptic film. It represents the audience a shattered world not as a consequence of climate change or the breakthrough of the artificial intelligence, but the rooted evil of human nature.

Roy Scranton is really thinking ahead to the end, both of the entire humanity and of the individuals. He is brilliant at associating all his unparalleled experiences and extensive knowledge together into a philosophical introspection of human civilization in a discourse of carbon-fueled economy, global climate change, resource and energy challenge, terrorism, wars and politics. His introspection makes me think what we call “civilization”. Is civilization a selective consequence of human reason, or it is just a random survive by throttling other alternatives of itself? Agricultural civilization smothered away gather-hunting and nomadic living mode; industrial civilization replaced agricultural system. Right now, does our style, if it is something between the industrial and the one emerging, be eliminated by the emerging one? The problem is not the termination. What bothered us is that we ourselves are the terminators. Not as a concreate corporeal individual, but as a giant Leviathan. As he writes, “The enemy isn’t out there somewhere — the enemy is ourselves. Not as individuals, but as a collective. A system. A hive.” (p. 85). It is a tragedy that collectiveness has crippled every individual, weakened him/her, and caused him/her losing the integrity he/she has in the beginning. It is a tragedy because we did not do it right. We screwed up. Now a theoretical question behind this mess is, do we screw up because of the flaws inherent in our moral reason, or because of the defects of our physical and corporeal nature?

What difference does it make between if we believe the ending is open or if we believe the ending is on the way? The difference between the hope and the desperate? What is the hope? After the dismantling of the human individual, we are now fragmented into pieces that cannot bear a slight blow. Death becomes the last thing to make us whole again. The only hope. The uncertain certainty. Learning to die is a daily practice. It lies just in the fleeting moment between the inhale and exhale. A fleeting moment has contained all the vicissitude of the living things and their entire context.

Translation of Environmental Justice (Written by Peter S. Wenz, published in Chinese in 2007)